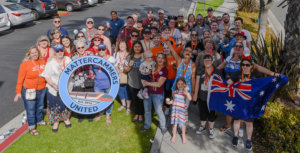 Being so close to the magic, HoJo Anaheim has become a home-away-from-home for many Disneyland fans over the years. Our resort-like property, spacious rooms, Castaway Cove water playground, and proximity to the magic has earned us a dedicated fan base from all over the world. But there’s one HoJo amenity that’s especially unique. Our live […]

Written by Andy Castro on April 23

As you may know, our pals Mickey and Minnie are currently celebrating their big 90th birthdays at Disneyland! HoJo Anaheim wanted to join the fun and National Polka Dot Day seemed like the perfect opportunity to rock the dots with our own special Mouse-inspired pool party! Our friends from @Sunstaches, @KidsEmbrace, @BumkinsBaby, @BuyHappyFeet and @BuckleDownProducts […]

Written by Andy Castro on January 30

How to Still Have Fun When Disneyland is Crowded

It seems like it doesn’t matter what time of year you plan a trip to the Disneyland Parks, it is always crowded. Which we totally understand. We love going to the parks all the time too. Even though the parks may be crowded when you are on your trip, these tips are sure to help […]

Written by Liz Call on December 17

No one blends brilliant photography and detailed Disneyland Resort information better than Andy Castro. Andy is a Southern California native and has been photographing the Disney parks for years. He also provides insider information on enhancements, refurbishments, remodels and merchandise at the Disney parks. Andy’s weekly blog, Dateline Disneyland, is regarded as one the most visually […]

Written by Jonathan Whitehead on December 26

Hello Adventurers! Trader Tommy here with an update on the new adventures available to anyone who dares! The Adventureland Trading Company is open for business at the Indiana Jones Outpost. Guests can go on several different quests to hunt for “juju”, which are little artifacts that they can collect and trade. Below is a quick […]

Written by Tommy on August 7

Written by Tommy on May 22

Disneyland opened in 1955 and since opening day, each cast member has worn a name tag. Some without an actual name printed, but all wore a tag. Here’s a great set of photos taking you through the basic name tags of the past and present. They have certainly morphed, but more or less have kept […]

Written by Tommy on April 24

Happy Easter everybody! If you haven’t tried the Easter Egg hunt at the Disneyland Resort, I highly recommend it! You can pay $5 for a map and you get a prize at the end, or just go around hunting for free and you can get a pat on the back. 😉 There are 12 eggs […]

Written by Tommy on April 20

RETRO DISNEYLAND HISTORY Remember the Viewliner? Very few do! This narrow-gauge, miniature train ran along parts of the Disneyland Railroad main line and made loops through Tomorrowland and Fantasyland. It only ran from mid 1957 to late 1958 when construction began for the Matterhorn and the Submarine Voyage. It was billed as both the “fastest […]

Written by Tommy on April 17

RETRO DISNEYLAND HISTORY On August 27 1955, The Mickey Mouse Club Theater officially opened to the public in Disneyland near the famous tea cups and King Arthur Carrousel.

Written by Tommy on April 10