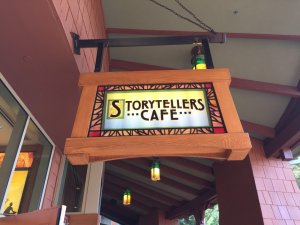 Hello everyone! Tommy here with a Disney Dining review. First up is Storyteller’s Cafe. This dining experience is located at the Grand Californian Hotel. If this is a stand alone trip, the Grand validates parking for up to 3 hours. Otherwise, the restaurant is a 20 minute walk from the Howard Johnson Anaheim. My wife […]

Written by Jonathan Whitehead on February 11

IN THE SPOTLIGHT: CENTER STREET PROMENADE

It wasn’t long ago if guests asked how to walk to “downtown”, we would point them towards Downtown Disney. Or tell them that it was too far to walk to downtown LA. There simply wasn’t any reason to send our guests to downtown Anaheim. Things are changing though as a handful of stores and restaurants […]

Written by Tommy on January 22

IN THE SPOTLIGHT: BOWLING AT "300 ANAHEIM"

With the Happiest Place on Earth right across the street from our hotel, it’s easy to forget that there are other things Anaheim has to offer. I recently had the chance to visit 300 Anaheim with our good friends from MouseWait, and was very impressed with the place. It’s located within the Anaheim GardenWalk entertainment […]

Written by Tommy on March 13

INNSIDE SCOOP: THE EARL HAS ARRIVED!

Written by Tommy on December 20

Let’s take a little break from the Parks, shall we? I recently visited Umami Burger’s newest location in Downtown Anaheim, which opened just last week. The word “Umami” is Japanese for savory, which is how they describe all their burgers. There have been many rave reviews about this place but most of their locations are […]

Written by Tommy on July 12

Hoorah! More Savings at Mimi’s Cafe! When you think of Happy Hour, you don’t usually think about kids, right? We HoJo folks are always on the lookout for fun family eating locales and for ways to save you a few bucks.

Written by Jonathan Whitehead on September 9

The early 1960’s are near and dear to the HoJo and of course Disneyland. New attractions were underway at the park and the 10-year anniversary was coming up in 1965. Construction began in 1962 for The Haunted Mansion attraction with a hopeful opening date in 1963. By 1963 the exterior of the Mansion was complete […]

Written by Jonathan Whitehead on July 25

Written by Jonathan Whitehead on July 20